So Thankful for Crystal Light!

It's a good thing Xyrem works so well at giving me a better night's sleep, because the taste almost isn't worth it...

I've heard so many different ideas of how other people with narcolepsy take their nightly doses of Xyrem. From mixing it with Gatorade, orange juice, or lemon-lime soda, to simply sucking it up and taking it plain (my least favorite option).

The absolute best thing that I have found to cover the taste, without interfereing with the efectiveness of the dose, is to add a little liquid Crystal Light flavoring. The strawberry lemonade is definitely the best; it really covers up a lot of the bitter Xyrem taste.
It has 0 calories, so it won't interefere with the amount of sleep you get per dose (at least I have never noticed any differences). It just makes it so much easier to take my nightly doses, without having to mentally prepare myself and cross my fingers that I can force it down in one gulp!
Posted by Unknown at 2:54 PM No comments:

Email ThisBlogThis!Share to TwitterShare to FacebookShare to Pinterest
Labels: Xyrem

So if you've read my previous posts, you know that I was doing really poorly at my first university. I took a break last fall so I could start taking Xyrem and then transferred to the University of Toledo for a fresh re-start close to home.
The semester is just about over, and I've already received a final grade for 1 of my 4 classes... 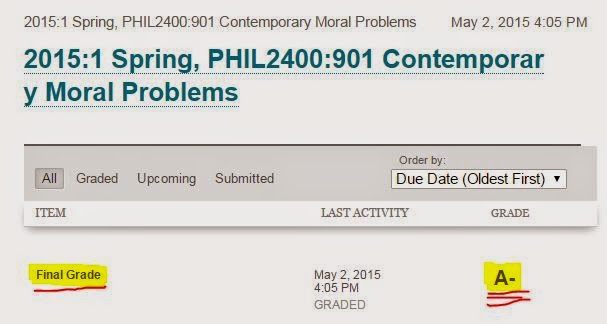 I got an A- in my Philosophy course! Of the four classes I took, this was the one I was most concerned about (the work load was the heaviest).

I still have to finish finals this week to get the rest of my grades in, but even this one grade shows how much I have improved academically since I started taking Xyrem :) I can't believe that I'm actually excited to look at my final grades, instead of dreading it like I did when I was struggling through school.
Posted by Unknown at 1:30 PM No comments:

Cutting Prozac Out of my Daily Meds

Since Xyrem has almost stopped my cataplexy attacks, I decided last fall that I wanted to stop taking the antidepressant I started in July for cataplexy. I didn't like some of the side effects; it was making me more nervous than I already naturally am, and I learned that it can prevent weight loss which I definitely didn't want happening.

Since I work at a school and was worried about the withdrawal effects making me moody around the kids, I had to plan to stop taking them over a break. Between having surgery, longer-than-expected recovery, and turning 21, that opportunity didn't show up until spring break after Easter.

So now, it's been an entire month off of Prozac and I haven't had any weird withdrawal symptoms! All that worrying for nothing lol. There has been a small increase in cataplexy which is manageable, and, strangely enough, I'm once again having hallucinations when I sleep.

Nine months on Xyrem and I wasn't having ANY hallucinations at night or during naps like I did every time I fell asleep before Xyrem. It was a major relief! But now I'm noticing occasional hallucinations when I nap, and sleep paralysis the other night before my Xyrem had fully knocked me out, but nothing so horrible that I can't deal with. I think it's pretty interesting, and definitely not a side-effect of cutting off antidepressants that I had expected. Really, the only change I've made was cutting out my Prozac, so that has to be the culprit.

And now I'm laughing out loud at myself as I write this, because I just realized if I were to say to a non-narcoleptic that I stopped my Prozac then started hallucinating again, I'd probably get some funny looks and psychiatrist referrals. Thank god I'm part of a wonderful community of people with narcolepsy who understand what I mean! :)